How Hot Does an ATV Get

Going into the wild forest trails or isolated sandstone hills was highly risky and trouble-induced a couple of years ago. One of the major reasons was the lack of a reliable vehicle that would get totaled in the path and leave you completely stranded. But the constant innovation in the off-road vehicles has provided the modern generations with powerful and efficient All Terrain Vehicles that can take you to nearly any land present on Earth. ATV riding in several countries has become more like a sport and weekend activity.

People who love the ATV driving experience and the wild trails often ride their vehicles for very long hours. When the ATV runs constantly through difficult trails all its features run at utmost capacity for hours and this often leads to the engine getting severely hot. Many trails barely have two or three trees and this lets the ATVs run totally in the hard-hitting sun making the vehicle get hot more easily.

The ATVs are built to withstand harsh conditions and ride through terrible ground conditions but some riders get worried about the temperature and wonder if they are damaging their vehicle and will it shut down completely due to overheating.  Here you will see what the maximum normal temperature of your ATV Should be and various other aspects related to Overheating of your ATV. 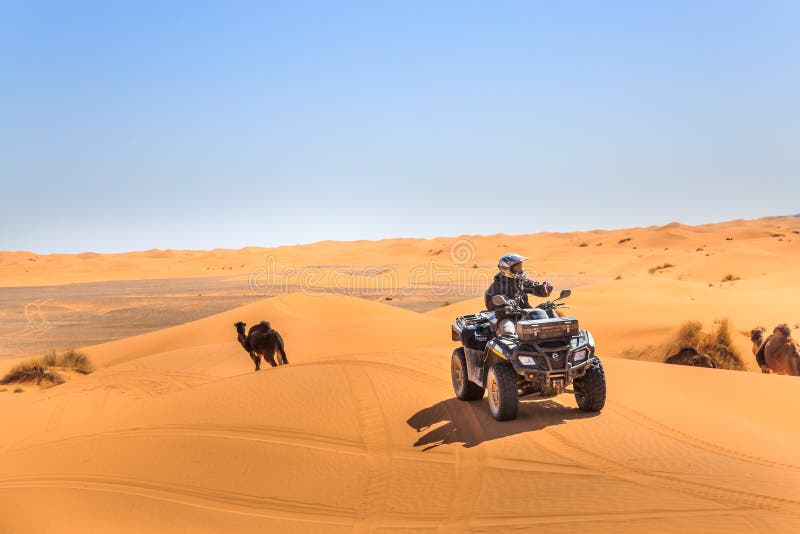 1. ATV riding in the desert where temperatures are much higher.

The temperature range in the Quad

Even the owner manuals of the best ATVs on the market do not come with a mention of the normal operating temperature of the ATV. But this doesn’t mean that the leading ATV Manufacturers are not worried about overheating. Most ATVs present in the international market are equipped with indicators on the vehicle dashboard that function as warning lights by turning on. This indicator is frequently equipped as a symbol of a thermometer. There are some distinct ATVs that have digital thermostats or analog temperature gauges that work as temperature reading devices.

There have been several temperature tests by many experts and across the internet and the unanimous claim for the average normal temperature of an ATV is around 200 degrees Fahrenheit that in celsius stands at 93 degrees. Similarly, the lowest temperature of utmost functionality in the ATVs is found to be 190-degree Farhenheit which becomes 88 degrees in celsius.

Now comes the bigger question, what should be the non-worrying maximum temperature in the ATV. The value that can be accepted from reliable analysis from ATV experts is 215 degrees Fahrenheit which convert into exactly 101.6 degrees on the Celcius scale. Although some ATV forums have slight claim differences and suggest the maximum normal temperature which cannot be considered to be in the overheating section is around 240 degrees in Fahrenheit.

The main reasons why overheating in your ATV occurs

1. There are three main reasons that are most common for making the ATV get overheated, among them the first reason to consider will be the full-throttle use. The All-Terrain Vehicles are not meant for speed, although some costly ATVs do provide a great top speed value, it still doesn’t make them a speed-major vehicle. There are some off-road trails that are typically barren and the ground doesn’t have dents and scattered rocks, in here riders often get intimated to ride at full-throttle. As the ATVs are specifically built with off-road trails in focus, running at full throttle exhausts the engine by running at full capacity for a prolonged duration.

2. The other common reason is the low level in Coolants which occurs more often than you think. You might already know being an ATV owner that a coolant is present in the engine that helps in maintaining a normal temperature. In general circumstances, the coolant will reduce but at an extremely slow rate by evaporation over several months. The dependable metric is that only 1/4th of an inch should get reduced around a span of four months. If the reduction rate is much greater and you need to refill coolant often then most probably there is a leak. Fixing the engine coolant will resolve the overheating issue in this case.

3.The other most common two reasons are radiator engulfment and overweight ATV. This has happened several times with ATV riders who love to ride on muddy trails and pack stuff more than required. The ATV radiator can get easily engulfed in mud and stop the air circulation in the engine, this results in overheating, so checking the radiator in case of overheating events is a must. Every ATV has a specific load capacity and when this gets exceeded the stress falls on the engine which can lead to overheating.